The Banking on Climate Chaos 2021 report has revealed that the world’s 60 largest banks worldwide have pumped over $3.8 trillion into the fossil fuel industry since the Paris Agreement, with financing levels higher in 2020 than in 2016.

The report was authored by Rainforest Action Network, BankTrack, Indigenous Environmental Network, Oil Change International, Reclaim Finance, and Sierra Club, and is endorsed by over 300 organizations from 50 countries around the world. It has this year expanded its focus from 35 to 60 of the world’s largest banks.

The report found that these banks have poured a staggering $1.5 trillion into 100 top companies behind fossil fuel expansion projects – representing an alarming 10% increase in 2020 over the previous year, even amidst a pandemic-induced recession that resulted in an overall reduction of fossil fuel financing of roughly 9%. This includes companies behind highly controversial projects like Enbridge’s Line 3 tar sandspipeline, one of the report’s 20 case studies.

French and US Banks Under Fire

French banks rose to become the fourth-largest home of fossil finance in 2020, even surpasseing their British neighbors to become Europe’s biggest backers of oil, gas and coal last year.

BNP Paribas provided $41 billion in fossil financing in 2020, powered largely by significant loans to supermajors. This constitutes the biggest absolute increase in fossil financing last year, despite the bank’s relatively strong policy commitments on unconventional oil and gas. BNP Paribas was the EU’s worst fossil bank between 2016 and 2020, with Barclays taking top spot in the UK.

U.S.-based banks continue to be the largest global drivers of emissions in 2020, with JPMorgan Chase remaining the world’s worst fossil bank, with nearly $317bn of support to fossil fuels between 2016 and 2020. Chinese and Japanese banks’ fossil fuel policies were also sorely lacking, with MUFG and the Bank of China topping the polluting leaderboard in each country.

The report highlights the growing gulf between banks’ net-zero and Paris-aligned commitments, and the reality of their financing. 17 of the 60 banks have recently pledged to achieve “net zero” financed emissions. But despite some improvements regarding direct project-related financing, our analysis shows that for many of the world’s worst funders of fossil fuels, these plans so far are dangerously weak, half-baked, or vague.

While financing for tar sands continued a downward trend, decreasing by 27% in 2020 to $16 billion, coal mining financing actually increased slightly in 2020 to $25.4 billion; this is 25% higher than in 2016. Banks’ financing for fracked oil and gas fell by 8% and remains dominated by US banks. Bank finance for the 30 largest LNG companies was higher in 2020 than in any other year since the Paris Agreement, at $28.8 billion, reflecting a misguided notion that gas serves as a transition fuel.

Banks’ most urgent task in fighting climate change is to end support for the expansion of fossil fuels and commit to a 1.5°C-aligned phase-out of fossil fuel financing. The reports’ authors say that banks must adopt meaningful 2021 action plans and replace distant net-zero promises with meaningful policies enacting zero tolerance for fossil fuel developers.

Ahead of COP26 in Glasgow, it is also crucial that countries account for the role their banks play in driving emissions. In France, the government should act and mandate banks to adopt exit policies for non-conventional oil and gas. 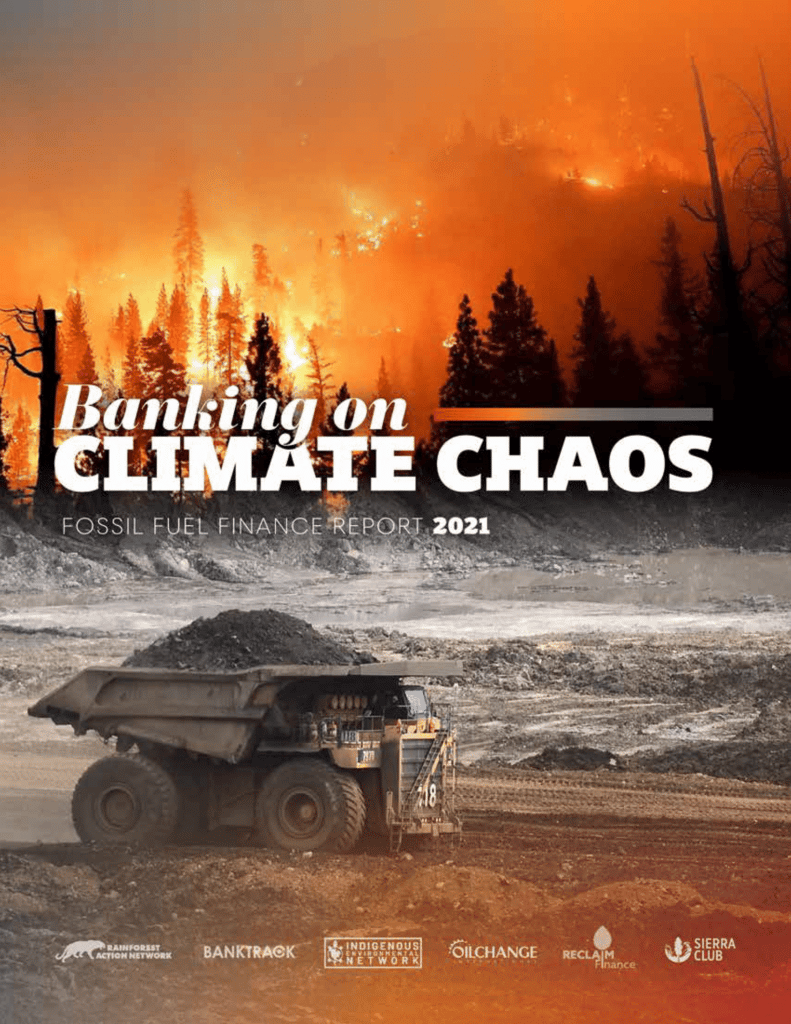