Call on shareholders to vote against Total’s “climate” plan

Addendum: Avaaz has decided to join our call to Total’s shareholders, in continuation of its campaign against the EACOP/Tilenga project developed by the oil major in East Africa. More than one million people have supported Avaaz’ call.

28/04/2021 – Reclaim Finance and 9 other climate NGOs have written to Total’s shareholders, including prominent investors Axa and Amundi. The letter calls on shareholders to vote against the oil and gas major’s weak climate strategy and against Patrick Pouyanné’s renewed mandate as Total’s CEO if they want to stay true to their climate commitments.

A critical vote will be taking place on May 28th at Total’s AGM. The shareholders of the CAC40’s biggest polluter will be asked to vote on two critical issues for the planet and the people: do they support the company’s climate strategy and its 2030 targets and do they support Patrick Pouyanné’s renewal as CEO and head of the Board until 2024?

We have studied Total’s strategy in depth to assess whether or not it is aligned with the international climate goals that are supported by most financial players. Laid out in a briefing, the verdict is crystal clear: Total’s 2030 targets are no way near what climate science requires. Plans to cut down on carbon intensity of oil products would need to increase at least threefold, targets to mitigate the group’s scope 3 emissions are not quantified, thus leaving out 90% of the company’s emissions, and there is no clarity on how much Total intends to rely on carbon capture and storage technologies to achieve its goals.

Chris Hohn, the investor who established “say on climate” principle, is calling on shareholders to push back on Total’s say on climate and vote against Patrick Pouyanné’s renewal: “Five-year targets are key. Without near-term targets, we’re not going to get anywhere, we’ll have vague commitments that don’t do anything. Targets and a plan to back them up are fundamental to the change we need. It’s absolute greenwashing and hypocrisy to say ‘we’re supporting all this great stuff on climate’ and then support plans that don’t lead to any [CO2 emission] reductions. (…) It’s obvious that shareholders should vote against Shell’s and Total’s proposed transition plans and against directors”.

Stabilizing global warming below the critical 1.5°C threshold requires oil and gas production to diminish by 4 and 3% per year from 2020 to 2030, Total plans to increase its fossil gas production by 30% over the next 10 years and has not announced significant cuts in oil production. In 2030, 80% of Total’s capex will still be spent on fossil fuels and the company is currently doing all that it can to extend its oil and gas empire, be it in the Arctic region or Africa, and no matter how destructive for the ecosystems and communities.

According to Stéphane Voisin, member of the European sustainable finance platform and author of Detox Finance: “Total has made important climate commitments but the company must not demonstrate its capacity to find non-fossil fuel growth drivers: in light of this, Total’s involvement with EACOP oil pipeline and the Tilenga project is a preoccupying example of the group’s difficulty in aligning with the Paris climate agreement”.

Despite the alarming gaps in Total’s so called “climate” plan, we expect many shareholders to come up with creative reasons to keep supporting Total’s strategy and management. Axa and Amundi are likely to join that bunch since they voted last year against a shareholder resolution by 11 investors (including Meeschaert and la Banque Postale Asset Management) calling on Total to provide a more detailed climate plan. This year, Axa, Amundi and co may be tempted to once again celebrate any progress made, be it baby steps, and the fact that Total is consulting shareholders for the 1st time on climate, no matter how weak their climate ambition really is.

The fact that shareholders are clearly very uncomfortable about calling out oil and gas majors such as Total says a lot. It goes to show how financial players have not yet accepted the fact that tackling climate change demands cuts in oil and gas production and leaves no room for fossil fuel expansion plans. All of them look away every time we raise the need for oil and gas phase out plans.

Whether they like it or not, it’s the natural course of history and our organizations will be making sure of it. We will be watching the way shareholders vote at Total’s AGM and calling them out. Starting this thursday, we will be asking AXA how they plan to vote on May 28th: will they make the same mistake as last year or vote in accordance with their commitments to align with 1.5°C pathway and achieve carbon neutrality by 2050?

Baby steps are no way near enough to address the growing climate emergency. In the lead up to COP26 in Glasgow, we will consider taking action against those who are spending too much time stressing their climate commitments and not enough on how to actually meet those commitments with operational fossil fuel phase out policies.

A copy of the letter and the briefing have also been sent to the following voting advisory agencies: ISS, GlassLewis and Proxinves.

Our letter to Total’s shareholders 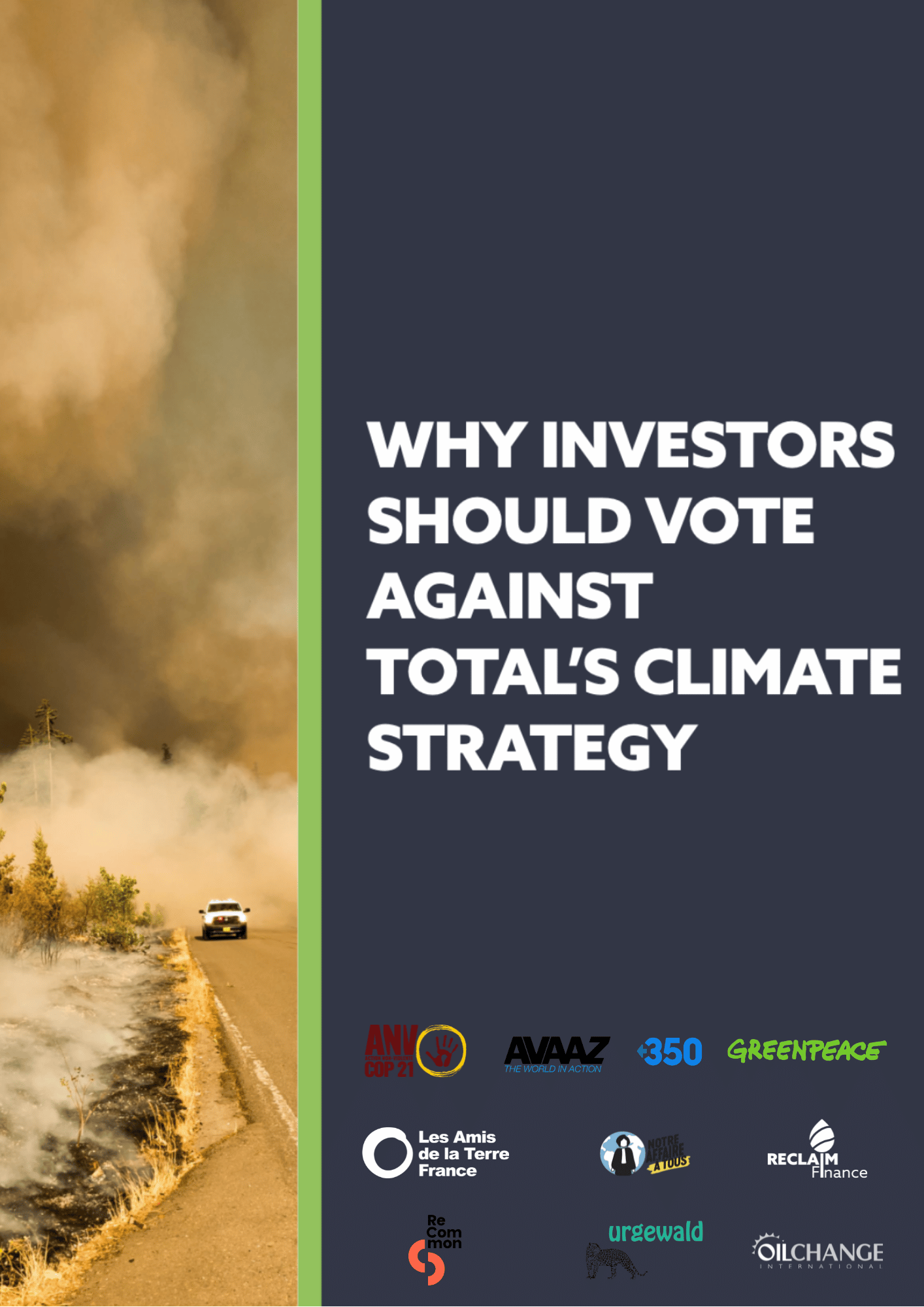