The latest version of the most comprehensive report on fossil fuel financing by international banks, “Banking on Climate Change 2020,” was released today.

The “Banking on Climate Change 2020” fossil fuel finance report is a collaboration between Reclaim Finance, Rainforest Action Network, BankTrack, Indigenous Environmental Network, Oil Change International and Sierra Club, and is supported by more than 250 organisations from 45 countries around the world, including Friends of the Earth France.

The report covers 35 major international banks, including the four French banks BNP Paribas, Société Générale, Crédit Agricole and Natixis. It totals the loans and equity and bond issues of 2,100 companies in the coal, oil and gas sectors worldwide over the period 2016-2019.

The data also shows that the majority of the banks analysed, including Crédit Agricole and Société Générale, have increased their support for the 100 companies that are planning the most new coal, oil and gas projects and confirms Société Générale’s growing appetite for shale gas. 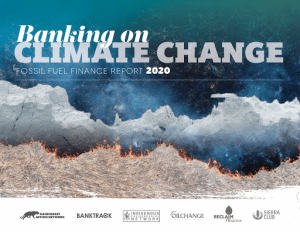