An increasing number of large companies and financial players claim to be working towards carbon neutrality and alignment with the climate goals of the Paris Agreement. To rationalize their strategy, these institutions are increasingly relying on climate scenarios aiming at stimulating the evolution of human activity, considering the goals set to limit global warming. The outcome of these actors’ commitments depends on the scenarios they chose.

In most cases, due to a lack of ambition or short-sightedness, these scenarios guide us towards global warming widely exceeding 1.5°C above preindustrial levels. They become greenwashing tools, allowing corporations and financial players to maintain—and even develop—the most polluting activities while professing a strong climate commitment.

The study of climate scenarios reveals the existence of 5 main traps.

This memo calls for financial, political, economic, and social actors to be responsible. They must demand robust 1.5°C scenarios from standard-setting agencies, such as the IEA. In the meantime, they must immediately become aware of the accumulated delay in tackling the climate emergency and raise their efforts above those implied by current scenarios such as the SDS. 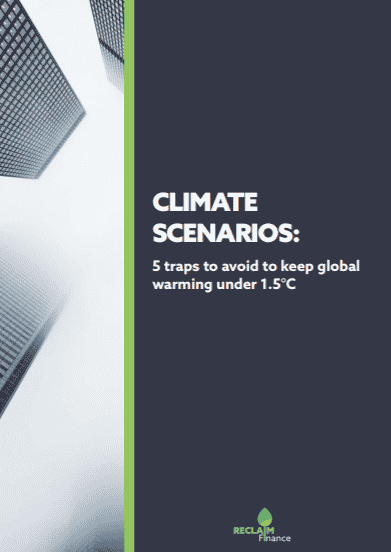 We identified five traps, hiding a sixth one: the protection of the fossil fuel sector at all costs

While the reduction of fossil fuel production is essential to respect a 1.5°C or even 2°C trajectory, many scenarios take advantage of the five loopholes to keep fossil fuels at the heart of the world’s energy systems beyond 2040-2050 and forecast massive investments in the sector.

Financial players must immediately commit to entirely phasing out fossil fuels by established and documented deadlines—2040 at the latest in Europe and 2050 elsewhere for gas and oil, and ten years earlier for coal—and immediately stop financing new projects and the players that enable them.