Two days ahead of the 5th Paris Agreement anniversary, 18 NGOs are releasing a joint report showcasing 12 of the most devastating fossil fuel projects that are currently planned or under development. These expansion projects alone would use up three-quarters of the total remaining carbon budget if we are to have a 66% probability of limiting global warming to 1.5° Celsius.

The report exposes the banks and investors that are providing financing to the fossil fuel companies developing these large-scale, contested coal, oil and gas expansion projects. It highlights concrete policy demands for the finance industry. The finance sector needs to rapidly move money and services such as insurance out of the fossil fuel industry. The first priority should be to no longer enable coal, oil and gas expansion projects – such as those covered in the report – to move forward.

The case studies covered in the report were chosen based on their detrimental local and global impacts. They are being pushed forward against local resistance and despite calls by scientists and numerous political leaders to phase out fossil fuels.[1] The case studies are: gas extraction in Mozambique; oil & gas development in Suriname; oil & gas drilling in the US Permian Basin; oil & gas extraction in Argentina’s Vaca Muerta region; coal and gas in Bangladesh’s Payra Hub; China’s new coal power plants; India’s coal mines; coal expansion in the Philippines; gas extraction as part of Australia’s Burrup Hub; drilling for oil & gas in the Norway Barents Sea; oil & gas projects and pipeline construction in the East Mediterranean; and offshore oil & gas drilling in the UK.

Together, these 12 projects are expected to cause at least 175 gigatons of additional CO2 equivalent emissions, should they move forward as intended by the companies involved. This is almost half of the 395 Gt of carbon budget remaining if we are to limit global warming to 1.5°C with a 50% probability. It is almost 75% of the remaining 235 Gt carbon budget which would provide a 66% probability of limiting global warming to 1.5°C. [2]

Fossil finance is alive and well

The report finds that financial institutions have provided $1.6 trillion in loans and underwriting since January 2016 and invested $1.1 trillion in bonds and shares in the 133 companies driving the 12 fossil fuel expansion projects. [3] On the banking side, the companies that have received the most funding since the Paris Agreement are BP, ExxonMobil, Petrobras, State Grid Corporation of China and Occidental Petroleum with a total of $358 billion in loans and underwriting from January 2016 to August 2020. The companies in the report with the highest investment value are Chevron, ExxonMobil, Royal Dutch Shell, Total, and BP. Together, investors hold bonds and shares in value of $394 billion in these five companies, as of August 2020.

20 investors provided almost half of the total investments – $535 billion of the total $1.1 trillion – identified in the report. Among the top investors, US financial institutions are the worst offenders. With bonds and shares worth $110 billion, BlackRock (USA) is the top investor in the report’s coal, oil and gas companies. Vanguard (USA) follows closely behind with $104 billion in bonds and shares. State Street (USA) is in third place with $50.8 billion, followed by Capital Group (USA) with $48.4 billion. Only four of the top 20 investors are not from the US: the Norwegian Government Pension Fund with $31.9 billion in fifth place, UBS (Switzerland) with $11.8 billion in 11th place, Deutsche Bank (Germany) with $10.4 billion in 19th place and Legal & General (UK) with $9.8 billion in 20th place.

The top 20 banks provided more than half of the total funding to the fossil fuel companies involved in these 12 projects: $949 billion out of the total $1.6 trillion. The US banks CitiGroup, Bank of America and JPMorgan Chase are the top financiers with a total of $295 billion. There are eight European banks among the top 20. Together, they provided $308 billion, led by Barclays ($66.4 billion) and HSBC ($55.2 billion), and followed by BNP Paribas ($52.7 billion), Deutsche Bank ($27.6 billion), Credit Suisse ($22.5 billion) and Santander ($21.1 billion). The Japanese banks in the top 20, Mitsubishi, Mizuho and SMBC, provided financing worth $149 billion. Also among the top 20 financiers are the Bank of China ($26.5 billion) and the Industrial and Commercial Bank of China ($24.9 billion), and the Royal Bank of Canada ($24.7 billion).

“These 12 case studies illustrate the lamentable failure of banks to respond to the urgency of the climate crisis. Instead of adopting a rigorous approach that would prevent the expansion of fossil fuels and facilitate their phase-out, global banks are refusing to break with the fatal growth trend of fossil extraction. BNP Paribas, JPMorgan Chase and Mitsubishi all have very different coal, oil and gas exclusion policies. However, this report shows that there is something that clearly unites them: they all keep supporting some of the worst projects worldwide through their loyal financing to the oil and gas majors,” comments Lucie Pinson, executive director of Reclaim Finance.

“The Vaca Muerta geological basin in Argentina has the world’s second largest reserves of shale gas. But fracking is not financially viable without huge government subsidies: in 2021, the subsidies to private companies are projected to cost the government one percent of Argentina’s national budget, and four times its total health expenses projected for Covid 19. So exploiting Vaca Muerta is not part of the climate solution.” says María Marta di Paola, director of investigations with FARN.

A multitude of new exclusion policies and sustainability commitments have recently been released by banks and investors. However, the findings outlined in the “Five Years Lost” report prove that the finance industry is failing to align its business model with the Paris Agreement. The 12 case studies, while are by no means the only examples of unhindered fossil fuel expansion, should be seen as a litmus test for the industry. As long as financiers do not divest from the top companies driving these fossil fuel expansion projects forward, their sustainability announcements clearly ring hollow. It is high time for financial institutions to adopt policies that exclude companies whose fossil fuel expansion plans will blow our carbon budget. Otherwise global efforts to fight the climate crisis will fail.

“Developing new coal, oil and gas reserves while the world is already experiencing the devastating effects of climate change is insane. This is the opposite of reducing CO2 emissions as agreed five years ago in Paris. If carbon bomb mega-projects such as the ones showcased in this report move forward, we will overshoot 1.5° of global warming. The leading investors of the companies behind these projects are BlackRock, Vanguard and StateStreet. These institutions are gambling away our future and are exposing themselves to a risk of huge stranded assets at the same time. The only reasonable decision for investors in this situation is to green their portfolio and to quit companies planning new fossil investments now,“ says Katrin Ganswindt, Finance Campaigner with Urgewald.

[1] https://www.politico.eu/article/no-new-coal-un-chief-tells-eu/ [2] https://climateanalytics.org/publications/2019/zero-in-on-the-remaining-carbon-budget-and-decadal-warming-rates/ [3] Based on financial research conducted by Profundo with a last filing date of August 2020 for investors and looking at loans and underwriting services between January 2016 and August 2020 for creditors. 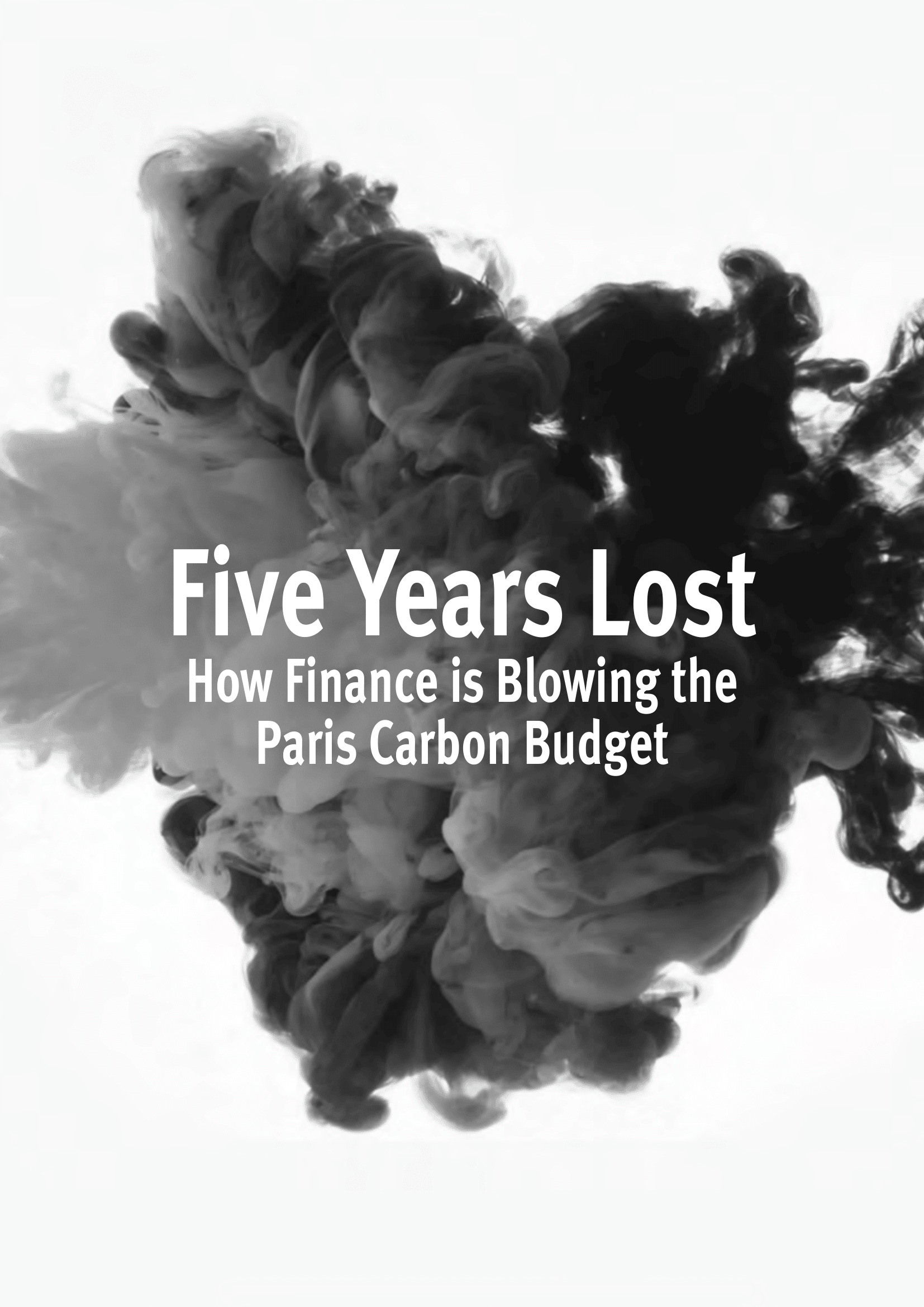