Total’s management has announced that it will submit a name change to TotalEnergies to a vote of its shareholders. Reclaim Finance and Greenpeace France have analyzed Total’s climate commitments. The verdict is indisputable: in putting an “S” onto “énergie” to underline its development in renewable energies, Total is getting ahead of itself, given that 99.7% of its production is in hydrocarbons and it still directs more than 90% of its spending towards fossil fuels. The report, entitled “Pipeline of pollution: Total responsible, finance complicit?”, breaks down Total’s promises and possible courses of action for financial players keen to respond to the climate emergency.

The report begins with an assessment of Total’s climate commitments. The company has committed to investing massively in renewable energies. Whilst the role of false solutions such as biomass is concerning, the significant amounts invested support Total’s communication efforts to appear as a multi-energy group. But these amounts must be compared with those invested in fossil fuels, and this is where the problem lies:

To invest in Total is therefore to invest in the expansion of fossil fuels and the aggravation of climate catastrophe.

A growing number of financial actors are committed to achieving carbon neutrality (net-zero) and aligning their activities with the 1.5°C objective. The way they adapt their relationship with Total SE is a good indicator of the sincerity of their commitments and potential challenges to their success.

Financial actors must table a new climate resolution requiring Total to adopt a real plan to decarbonize its activities and to condition their financial support on halting the development of new fossil fuel projects, a fortiori in non-conventional fossil fuels such as in the Arctic. 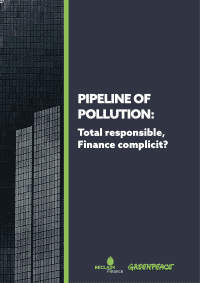