Out with Science, In with Lobbyists: Gas, Nuclear and the EU Taxonomy

On July 22nd 2021, Reclaim Finance published a report – Out with Science, In with Lobbyists: Gas, Nuclear and the EU Taxonomy – that exposes the lobbying from the fossil gas and nuclear industry to feature in the EU’s influential sustainable taxonomy. The report uncovers a multimillion euro lobbying operation that persuaded the EU Commission to disregard climate science. It stresses that gas and nuclear being included in the EU taxonomy would mean “the death” of this framework.

Fossil gas and nuclear energy are not “sustainable”

To be considered “sustainable” in the taxonomy, an activity should significantly contribute to at least one out of six environmental objectives set by the legislation without significantly harming another objective, aka the “do no significant harm” (DNSH) principle.

Fossil gas actively harms some of these objectives, let alone contributes to them. Indeed, gas could emit more greenhouse gas (GHG) than coal and is responsible for massive methane leaks. Furthermore, global gas production, infrastructure and use ought to be drastically reduced to limit global warming to 1.5°C.

On the other side, nuclear energy poses significant threats to various environmental objectives (notably water use, pollution prevention, healthy ecosystems). Apart from incident risks, the issue of nuclear waste stockage is a major obstacle to nuclear inclusion in the taxonomy. Moreover, other sources of “low carbon” energy are easily available, faster to deploy and often much cheaper.

The gas strategy: the lobbying bulldozer

776 staff have been employed by 182 gas-related companies and industry groups to lobby the EU. Together they spent up to €78m a year, with prominent contributions from oil majors such as Shell, BP Exxon and TotalEnergies.

This massive gas lobbying operation has been buttressed by support from Eastern European states like Hungary and Poland. Following several failed attempts to include gas, the EU Commission is now preparing specific regulation to make room for gas in and/or alongside the taxonomy.

The nuclear sector is composed of far fewer companies and organizations than the gas sector. Its lobbying operation is logically much smaller – at €7.9m annually, with 119 staff from 27 organizations – but no less active.

The frequency of meetings between EU Commissioners and nuclear lobbyists also significantly increased, jumping from 1.2 to 2.59 meetings per month.

The industry has amply benefited from state backing, with nuclear-dependent France vociferously advocating for its inclusion. While teaming up with notoriously pro-gas Eastern countries to promote nuclear inclusion, France notably softened its stand on gas inclusion. French state-owned EDF was the biggest individual nuclear lobbyist. The report also stresses the role played by “astroturfed” groups set up to “mimic” civil society groups, as well as by nuclear industry expertise and influence that spreads to the EU Commission’s own Joint Research Committee.

Nuclear’s fate is now in the hands of the EU Commission and should be decided in a coming set of delegated acts.

Saving the taxonomy.. And other EU environmental legislation

Reclaim Finance stresses that the Taxonomy was initially defined as a science-based list, but that economic and political pressures pushed the Commission to water down the science. It warns that the inclusion of gas and nuclear to the EU taxonomy would empty the framework of its remaining credibility.

The NGO calls on the Commission, EU Parliament and Member states to exclude gas and nuclear power. While the EU is defining its environmental agenda for the decades to come, it also argues for fossil fuel lobbyists to be banned from EU institutions. 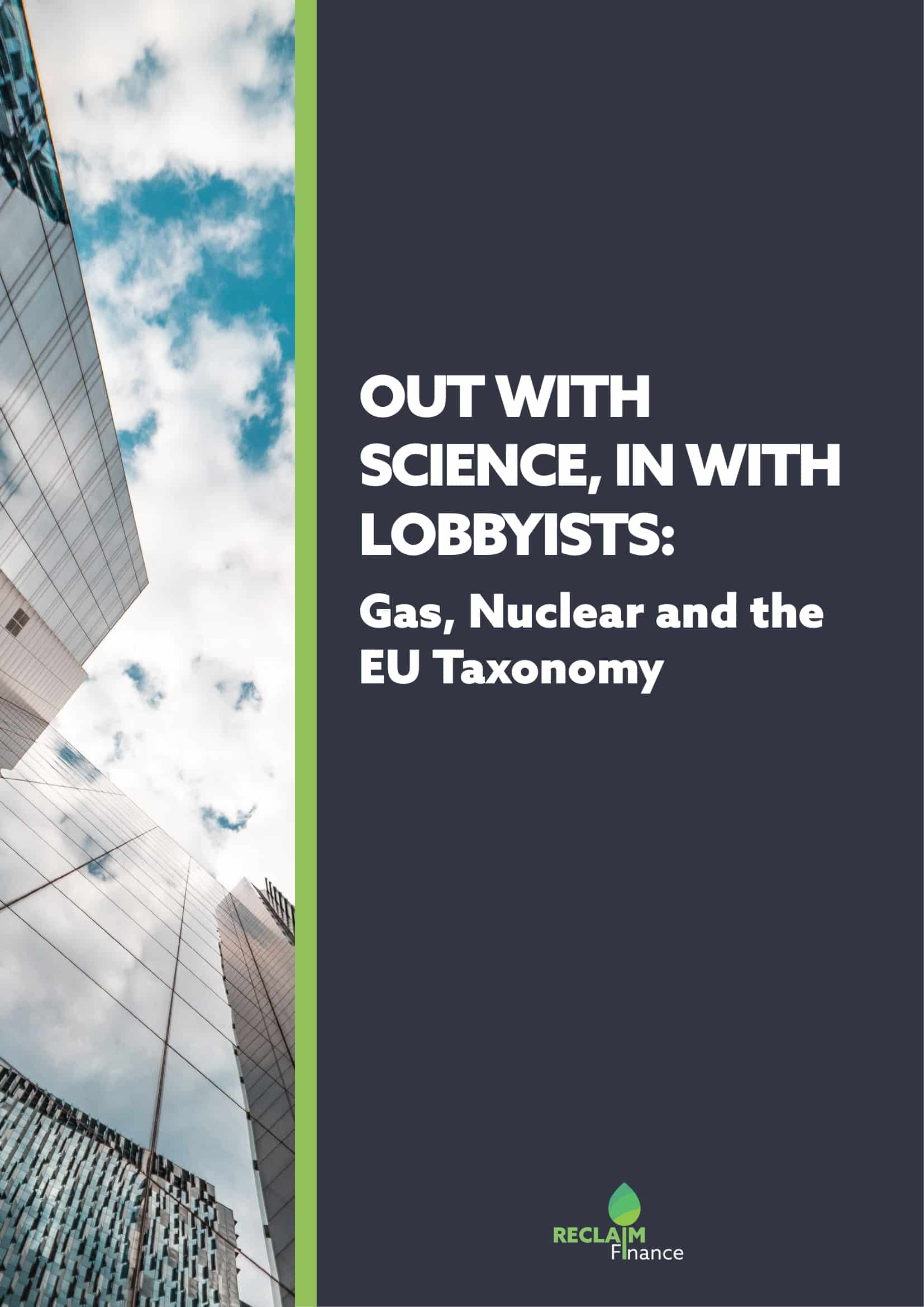 Following the publication of the report, the Italian utility company Enel provided information showing that it did not push for gas to be included in the EU Taxonomy and pushed for only renewable energy to be included in the EU Taxonomy. Similarly, the energy company advocates for green hydrogen, excluding the production of so-called blue (fossil fuel and CCS) or grey hydrogen (fossil fuel).

Reclaim Finance conducted an analysis of Enel’s current transition plan. The NGO noted the companies’ pledge to phase-out coal power generation by 2027. Enel’s team also confirmed that the company intends to phase-out gas power by 2050, tho no official commitments have been found. Reclaim Finance will further investigate Enel’s policy and could publish a specific article soon.