A new research by Reclaim Finance reveals that ECB’s exceptional purchases of corporate bonds amid the Covid-crisis benefited to European oil and gas majors, in spite of the fact that these companies are planning a massive increase in fossil fuel production at odds with EU climate goals and the Paris Agreement. This support contradicts ECB’s climate promises and shows the limits of its new climate roadmap.

Titled “Spreading the fossil fuel pandemic: How the ECB’s Covid corporate asset purchases are supporting oil and gas expansion”, the briefing analyzes the evolution of ECB corporate asset purchase holdings from April 2020 to September 2021, a period marked by a massive increase of these purchases in a context of the Covid crisis. It reveals that these purchases notably benefited to five European oil and gas majors – Shell, TotalEnergies, Repsol, Eni and OMV.

The main findings are: 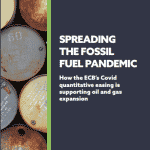