IS FINANCE UP TO THE CLIMATE CHALLENGE ?

From the IPCC to the IEA, no one now doubts the urgency of the climate crisis, and the rapid phase-out of fossil fuels required for 1.5°C to stay alive. Whatever the world’s governments decide at COP26, that means that private finance’s support for fossil fuels must also end. But banks, insurers and investors are still far from aligning with the demands of climate science: there are far too many weak coal policies and, astonishingly, next to no policies in place to turn off the taps for oil and gas expansion.

Unfortunately, the cascade of policy announcements over the past year hasn’t helped much. There are hundreds of companies developing new coal, oil and gas projects. Fancy pledges remain just that if they don’t decisively contribute to ending fossil fuel expansion now and quickly exiting coal. This is why Reclaim Finance will be tracking new announcements by some of the world’s biggest financial institutions before and during COP26. As CEOs strut onto the stage, we’ll be shining a spotlight, sifting the good from the bad, the green from the greenwashed.

As we go, we’ll watch out for the same old loopholes hiding behind net zero pledges and emission reduction targets, that prevent us from curbing both fossil fuel finance and emissions.

Financial institutions at COP 26: our reactions

With COP 26 around the corner, more and more private financial institutions are making new climate commitments. But what to make of them? How do we sort the good from the bad from the ugly? How do we make sure that they are not just dangerous distractions from key issues like fossil fuel expansion and coal, oil and gas phase out plans? In this section, we help you to navigate new policy commitments – what is a good step to quickly exit coal and/or stop fossil fuel expansion, and what is a dangerous distraction.

AXA IM takes a step in the right direction, with the exclusion from 2022 of a portion of the oil and gas sector. Unfortunately, the criteria used still leave the door open for companies responsible for more than 56% of planned oil and gas expansion. Furthermore, while the asset manager gave more teeth to its engagement policy by adding the threat of divestment, it is unclear what the demands made to oil and gas companies will be, and if any red lines will be drawn. Leaving three full years to the most polluting companies, including fossil fuel expansionists, is way too long.

Unfortunately, while the addition of the exclusion of coal mine and plant developers is welcome in theory,* huge loopholes in the policy means the bank will still be able to provide financing to big coal companies. The exceptions that the bank is allowing for companies with a “credible transition strategy” could jeopardize its own commitment to exit coal by 2030. The other glaring omission lies in the ongoing absence of any measures regarding Credit Suisse massive asset management activities. Credit Suisse AM still holds $2 billion in coal companies – it should immediately put an end to its support to companies developing new fossil fuel projects, starting with coal.

*to be confirmed by Credit Suisse, which we have contacted for clarifications.

What’s new: they apply the same exclusion threshold for all non-conventional oil and gas (30% production or 30% revenue) and have extended their exclusion policy to Amazon oil and extra heavy oil. The policy still does not cover Arctic gas, and the bank is still using a narrow definition of the Arctic.

Unfortunately, these new targets are only based on carbon intensity, allowing fossil fuel companies to increase their overall emissions under the pretense of taking action by reducing their intensity. Moreover, they do not come with concrete improvements in BBVA’s fossil fuel sector policies. Despite a coal phase-out commitment by 2030 in developed countries and 2040 worldwide, BBVA still does not exclude all coal developers. In fact, BBVA does not address the elephant in the room: fossil fuel expansion. The bank recognizes the IEA’s net zero scenario but does not apply its core principle: limiting global warming below 1.5°C means no new investments in oil and gas fields.

All the work remains to be done. As we outline in our tips below, setting carbon intensity targets is in no way sufficient. DWS says it is working on a new “energy policy” and it is about time. With $4.5 billion in coal, its policy must at least put an immediate end to support to all companies involved in fossil fuel expansion and commit to a swift exit of the coal sector by science-based dates.

Our reaction to NZAMI members’ announcement

While the bank importantly recognizes the need to stop supporting expansion in the coal sector, an important loophole in the way they will do so in practice lessens the announcement’s impact. Standard Chartered’s continued support to Glencore is a perfect illustration. Regarding the oil and gas sector, the bank’s pledge fails to align with main conclusions of the IEA’s net-zero scenario and should clarify that Paris aligned strategies means a clear stop to new oil and gas fields.

Despite this announcement, UBS AM is still the perfect example of an investor lagging way behind on climate. It can set as many targets as it wants, but if it fails to offer more than a ridiculous coal policy and still offers massive support to companies building new coal plants, they will be worth nothing. With more than $5.2 billion invested in the coal sector, UBS AM will have to do much better than a mere commitment to reduce the carbon intensity of less than a fourth of its assets.

Our reaction to NZAMI members ’ announcement

November 1, 2021 – On the first day of COP 26, LGIM, one of the biggest European asset managers, announced new 2030 interim targets for 38% of its assets, including a new criteria to exclude coal developers.

While LGIM needs to provide more details on what it announced on coal (a new exclusion of “companies making new investments in thermal coal”), the manager is finally making a step in the right direction by recognizing the need to divest from companies not making progress. With almost $7.2 billion invested in the coal sector, the biggest UK coal investor should confirm that it effectively plans to immediately exclude the 503 companies developing new coal mines, plants and infrastructure, as listed in the Global Coal Exit List. It also must commit to exiting the sector by science-based dates and commit to exclude companies making new investments in oil and gas, as required by the IEA.

Our reaction to NZAMI members’ announcement

Unfortunately, the biggest fossil fuel banker in the world did not announce an improved coal policy or the end of financing to fossil fuel expansion. JPMorgan Chase channeled more than $26bn to the coal industry between October 2018 and October 2020 and doesn’t seem ready to stop. Its 2030 portfolio targets, published last May, fail to solve its role in fueling the climate crisis.

6 tips to identify the good, the bad and the ugly

Ahead of COP 26, many banks, investors and insurers will be announcing new climate policies. These announcements are often used as a diversion tactic, to distract from bad practices, or worse, as a way to paint themselves green – while hiding the worst.

1. All long term commitments and targets should be coupled with an end to fossil fuel expansion

Almost 300 financial institutions have now joined alliances aiming at reaching ‘net zero’ emissions by 2050. But unfortunately, the gap between action and deeds remains bigger than the Grand Canyon, as none have taken serious steps to immediately stop financing companies’ fossil fuel expansion plans.

Short term steps should include 1) a policy to swiftly exit coal and 2) a commitment to cease support to companies and projects expanding coal, oil and gas output infrastructure or power generation.

Financial institutions tend to announce overall emission reduction targets that fail to tackle high-carbon sectors, such as fossil fuels, at the pace required. It’s critical that when a financial institution sets a target, it is backed by sector-specific policies to phase out support to the most polluting sectors as fast as climate science requires.

3. Mitigation targets should not only be based on carbon intensity

Financial institutions are currently disclosing short or medium term targets (whether for 2025, 2030 or 2050) that look at emission intensity only. Watch out for the trap: emission intensity targets allow fossil fuel companies to increase their overall emissions under the pretence of taking action by reducing their intensity. Such accounting tricks might fool some, but they can’t fool physics.

A combination of intensity AND absolute reductions (i.e. total emissions) is key to ensure real-world impacts.

Furthermore, many financial institutions are hiding behind the data gap to leave aside scope 3 emissions and thus the huge emissions derived from the use of fossil fuels. The current lack of comprehensive data on scope 3 emissions of companies should not serve as an excuse to delay action. Financial institutions know that the biggest source of emissions in their portfolios is the fossil fuel sector. No more data is needed to decide to act now to reduce support to coal, oil and gas.

4. Offsets should not be included in the emission reduction targets

Financial institutions often include the use of offsets in their ‘net zero’ pathway and so far, none of the Net Zero alliances exclude reliance on carbon offsets by their members. Carbon offsets are especially problematic: they fail to provide climate and environmental benefits and could provide a dangerous distraction to real greenhouse gas reductions. Reducing emissions means reducing emissions, simple as.

5. Toothless engagement on the spot

If financial institutions only put forward toothless engagement activities to help coal, oil and gas companies “transition”, that’s a sign that they’re not serious about real climate action. Engaging with companies will be ineffective unless it comes with clear requirements, deadlines and the threat of divestment.

Many promises to cut down support to polluting industries simply ignore a big part of financial flows. Banks’ underwriting activities are often ignored by commitments, while research has shown that banks provide more financing to fossil fuel firms by underwriting their bond and share issuances than through lending. Similarly, investors often fail to tackle the elephant in the room: passive investing. 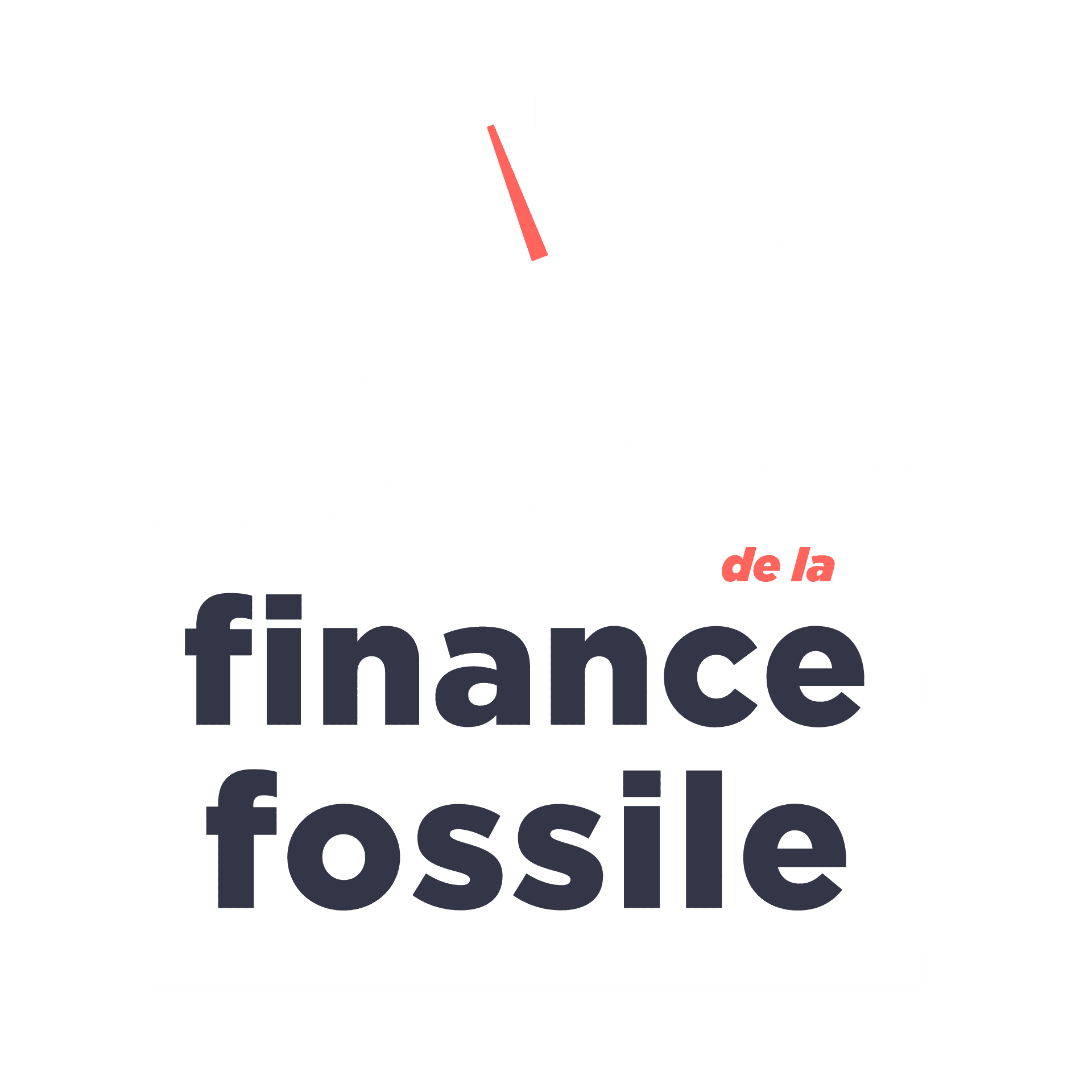 Our ranking of 57 French financial institutions’ oil and gas policies. 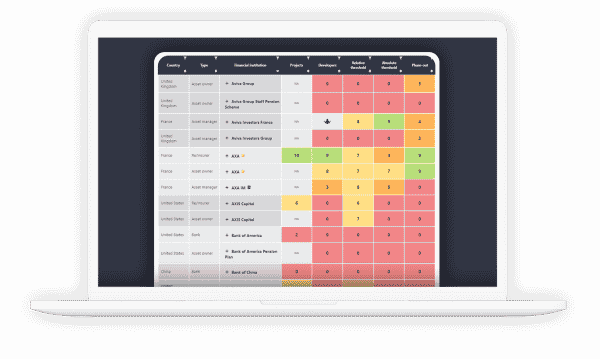