Paris, the 18th of June 2020 – A new report published today by Reclaim Finance and the NGOs behind the Unfriend Coal – Insure Our Future campaign reveals the names of the 15 largest insurers in the oil and gas industry, amongst which is AXA. After a campaign focused since 2017 on ending insurance to the coal sector [1], the NGOs are now calling on the insurers and reinsurers to adopt strong policies on all fossil fuels, in an effort to fully align themselves with the Paris Agreement objectives.

In a letter made public today [2], the NGOs are calling on 30 insurance and reinsurance companies to adopt global policies allowing for an alignment of their activities with the 1.5°C target. Amongst the recommended measures is the cessation of all insurance covers for new oil and gas projects. In 2018, oil and gas combustion accounted for 55.6% of global CO2 emissions.

“As governments are planning for their post covid-19 recovery strategy, insurers must act as champions of the transition towards a more sustainable, fair and resilient future in their capacity of subscribers, investors and corporate citizens” states the letter signed by 18 international NGOs, including Reclaim Finance, Urgewald and Greenpeace.

In a new briefing [3] also released today, the NGOs reveal the names of the 15 largest insurers in the oil and gas industry. Data on insurance premiums for oil and gas is not publicly available. Unfriend Coal/ Insure Our Future identified the main actors based on separate reports published by the consulting agencies Finaccord and HTF Market Intelligence, as well as on a market research conducted by the two firms separately.

Each agency produced a list of the first fifteen oil and gas damage insurers and, despite differences in ranking, AXA and 9 other insurers were common to both lists:

Lucie Pinson, founder and Director General of Reclaim Finance commented: “As risk managers of our companies, large insurance firms such as AXA are supposed to understand the need to quickly exit fossil fuels. But many of them still prefer pretty words to concrete actions. It is indeed difficult to believe that AXA’s commitment to align with the 1.5°C target is sincere, given that two weeks ago it voted against the climate resolution asking Total, the biggest polluter of the CAC40, to respect this very target [4]. Earlier this year, we revealed with Friends of the Earth France that AXA had increased its investments in shale oil and gas between January and March 2020 [5]. Clearly, those who are supposed to protect us are rather setting the conditions for a future covid crisis.”

Peter Bosshard, the international coordinator of the Unfriend Coal/Insure Our Future Campaign added: “The massive disruption of the fossil fuel industry created by the covid-19 crisis brings with it an opportunity to accelerate the necessary transition towards a low-carbon economy. At a time when powerful governments still subsidize politically well-connected oil and gas companies, the insurance sector must make its voice heard and bring scientific evidences to the decisional process surrounding carbon-intensive projects.”

And yet governments plan to increase oil production from 100 to 120 million barrels per day (mb/day) by 2040, that is to say three times the level of about 40 mb/day that is compatible with a 1.5°C target. These projects will not be possible without the insurers. 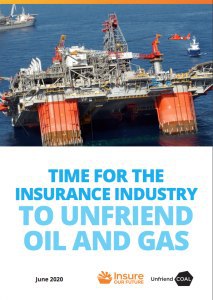 [1] The NGOs supporting the Unfriend Coal campaign have so far focused their activities on ensuring that insurers stop subscribing to and investing in coal, but they are now increasing the scope of their campaign to cover all fossil fuels that are incompatible with international climate objectives. To reflect this change, the campaign was renamed Insure our Future – the label under which it operates in the United States since 2018.

[2] The letter directed to the CEOs of 27 large property and liability insurance companies and 3 insurance companies with the most assets under management: 13 in Europe (Allianz, Aviva, AXA, Generali, Hannover Re, HDI global, Legal & General, Lloyd’s, Mapfre, Munich Re, SCOR, Swiss Re and Zurich), 10 in the United States (AIG, AXIS Capital, Berkshire Hathaway, Chubb, The Hartford, Liberty Mutual, MetLife, Travelers, TIAA and W.R. Berkley) and 7 in the Asia-Pacific region (MS&AD, Ping An, QBE, Samsung Fire & Marine, Sinosure, Sompo and Tokio Marine).

[3] The briefing can be downloaded here.

[4] Responsible investing: insurers translate words into actions – Argus de l’Assurance [In French][5] See the report La Place Financière de Paris au Fond du Puits, which reveals that AXA held USD $982 million in investments in 75 of the most aggressive companies in the development of new shale oil and gas wells, as of the end of March 2020.