The verdict is in : BNP Paribas has regained places in the shameful ranking of fossil fuels banks.

Resulting from the collaboration between Reclaim Finance, Rainforest Action Network, BankTrack, Indigenous Environmental Network, Oil Change International and Sierra Club, and supported by more than 250 organisations from 45 countries around the world, including Friends of the Earth France, the Banking on Climate Change 2020 report was published today. It compiles the loans & equity and bond underwriting of 2,100 companies in the coal, oil and gas sectors worldwide over 2016-2019.

The 35 international banks have granted a total of USD 2,700 billion in financing for fossil fuels after the adoption of the Paris Agreement in December 2015. Among them are the French BNP Paribas, Crédit Agricole, Société Générale and Natixis.

However, while North American banks largely dominate the ranking with 9 banks from the United States and Canada among the 15 largest financiers of fossil fuels, BNP Paribas is not to be left. Its USD 84.2 billion in financing for fossil fuels makes it the 13th international bank and the 3rd European bank to finance the most in these sectors, well ahead of other French banks.

An aggravating factor for BNP Paribas, the bank increased its financing for fossil fuels by 72% between 2018 and 2019. This makes it Europe’s largest fossil fuel bank in 2019.

In October 2018, the IPCC published its special report on 1.5°C warming, a report that confirms the need to accelerate climate action to avoid the worst impacts of climate change. However, BNP Paribas decided to increase its financing to the entire sector responsible for much of the current situation, and even to quadruple its financing to the 100 companies that are planning the most new coal, oil and gas extraction as well as related infrastructure.

In 2017, the bank adopted a policy on non-conventional oil and gas that led to a drastic reduction in its financing to companies mainly active in the oil sands and shale oil and gas. However, this policy only covers players with a significant share of their activities in these sectors. The more diversified companies, and in particular the majors, are being sidelined. For example, Shell has benefited from 3.5 billion dollars of financing from BNP Paribas between 2016 and 2019 although 60% of its development plans for the next 4 years are in the shale sector. 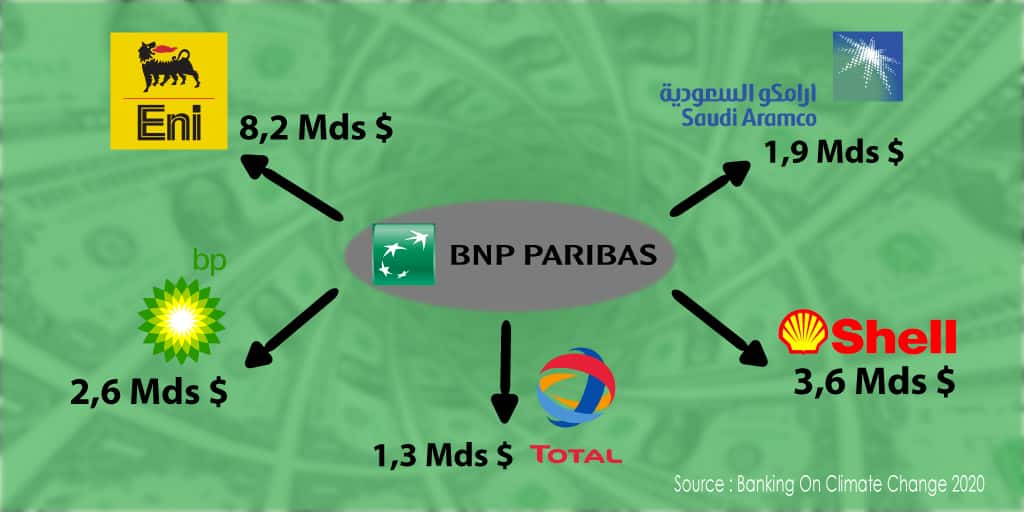 BNP Paribas’ loyalty to the majors is also demonstrated by its strong presence in the financing of oil and gas extraction in the Arctic and offshore. With USD 15 billion in offshore financing, BNP Paribas is the third largest international bank financing this growing sector. And despite a policy of exclusion in the Arctic, BNP Paribas remains the 7th bank to have financed the most in this sector since COP21. BNP Paribas’ main clients include the major oil and gas majors ENI (8.2 billion), Shell (3.6 billion), BP (2.6 billion), Saudi Aramco (1.9 billion) and of course Total (1.3 billion).

BNP Paribas is to be recognised for its commitment, through Climate Action 100+, to collective efforts in support of certain major companies. However, the progress allowed on Shell or BP is far from meeting the needs and the absence of any criticism or position taken by BNP Paribas towards Total is alarming given the role played by the French major in climate change.

Find out more about Total

Find out more about Total

At the end of 2018, Total’s upstream oil and gas production was up 18% compared to 2015. The group also planned to continue this fossil fuel expansion to reach an additional 700 kboe/d in 2020 compared to the end of 2017. This represents a 40% increase in hydrocarbon production over 5 years.

However, even today, the group continues to invest in oil and gas in the face of its declared support for the Paris Agreement. According to the Carbon Tracker Initiative, 67% of Total’s unsanctioned investments between 2019 and 2030 are “at risk” of becoming stranded in a 1.6̊°C scenario (the IEA’s B2DS scenario).

Total likes to talk about its investments in low-carbon energies. In fact, the NGO CDP estimates that only 4.3% of Total’s capital expenditure has been invested in low-carbon projects from 2010 to 2018. According to Total, in 2018 its organic investments totalled $9.2 billion for fossil fuel exploration and production, including $1.2 billion in exploration alone, compared to $0.5 billion for its Gas, Renewables & Power (GRP) business – a misleading category that mixes renewables and gas.

Finally, the increase in financing by BNP Paribas to companies producing electricity from coal shows the vacuity of the measures adopted by the bank since 2015 to control the impacts of such support. The good news is that BNP Paribas made a commitment last November to move out of coal. The bad news is that the course set is not the right one, since BNP Paribas is aiming for an exit from coal by 2040 for OECD countries (outside the EU), ten years too late to limit warming to 1.5°C. BNP Paribas is expected to publish a new detailed policy on the sector shortly. Let’s hope for the climate.

From 2016 to 2019 @bancosantander injected almost 26 billion 💲 into companies responsible for #climatechange. Along with #BNPParibas it is one of the European banks with the biggest increase in fossil financing 👎 https://t.co/jnprwrRidv #SantanderFossilBank #SantanderAGM pic.twitter.com/FIRnJ9C7xj

.@BNPParibas criticized the methodology of the #BankingonClimateChange 2020 as it shows a 72% increase of its fossil fuels financing

But @BNPParibas had no issue with it in the previous years when it was at the bank’s advantage !https://t.co/zb2idXN1Zzhttps://t.co/S3RSHgE7HE