“Eye of fire” in the Gulf of Mexico: which banks and investors are backing Pemex?

Last Friday, a gas leak from an underwater pipeline sparked an impressive blaze at the surface of the ocean west of the Yucatan peninsula in Mexico. The company pipeline belongs to the State-owned oil company of Mexico. If Pemex is to blame for the disaster, the banks and investors backing the oil company must also be held accountable. Among them : HSBC and JP Morgan Chase, two banks under public scrutiny ahead of COP 26 in Glasgow.

To make things worse, ¾ of Pemex’s production is offshore. It is highly likely the company will remain a key player of the offshore industry given its current offshore reserves under production (around 8 billion barils) and projections for expansion (around 5.7 billion barils until 2050).

Given the company is State-owned, Pemex does not have private shareholders However, investors and banks across the world are backing Pemex through loans, underwriting or bondholding. According to the Banking On Climate Chaos 2021, Pemex has received 55 billion dollars in financing for its carbon intensive activities from 2016 to 2020. The number 1 bank supporting Pemex is HSBC with 6,3 billion dollars. Followed closely by JP Morgan Chase, champion of the fossil fuel bank league for a few years now. BBVA, Bank of America, Japanese bank Mizuho, Citi, SMBC, Santander, French BNP banks Paribas and Crédit Agricole have all extensively backed Pemex in recent years. 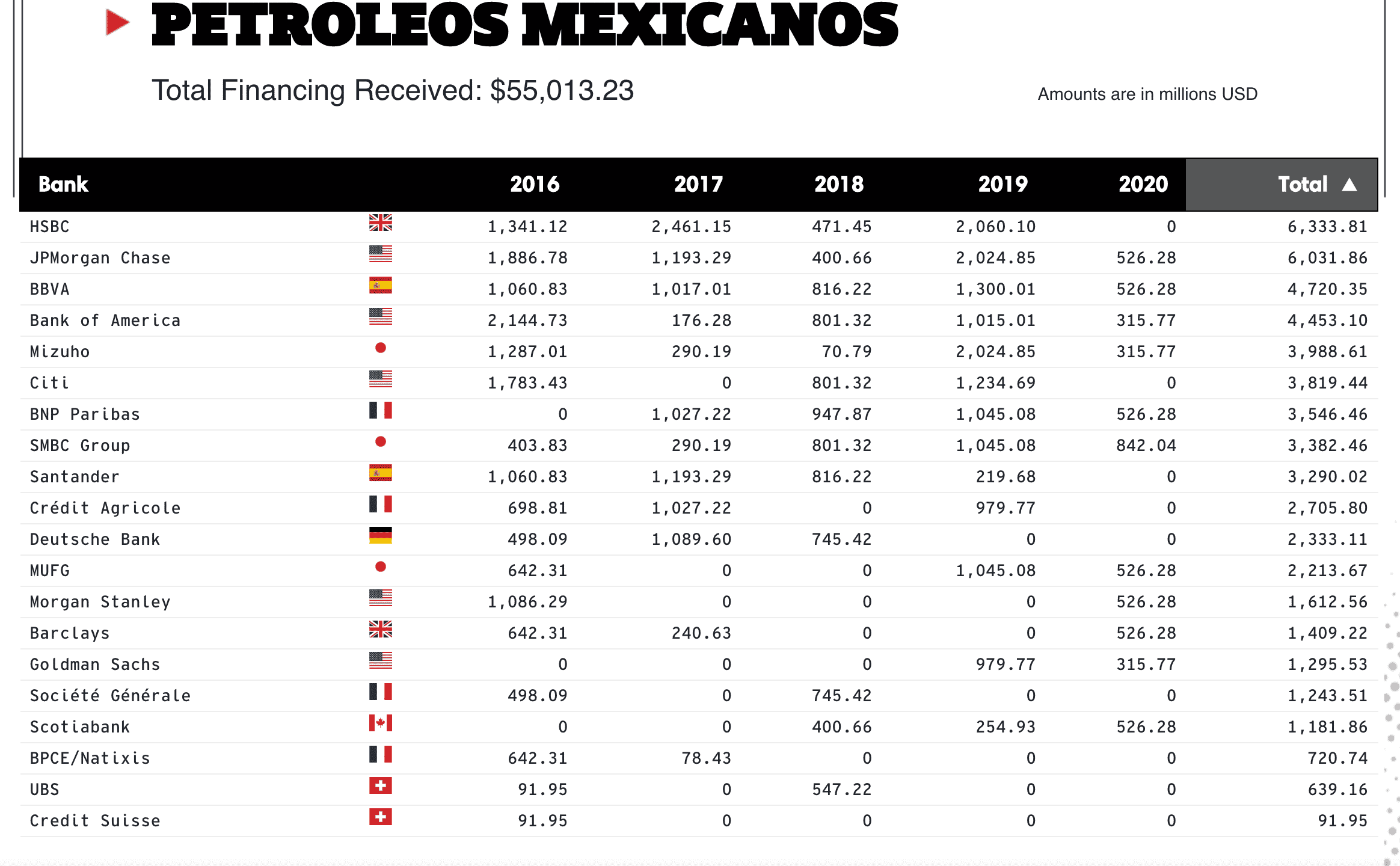 Offshore drilling risks increase with depth. The Ku Maloop Zaap platform and pipeline implicated in the Pemex leak and fire are “only” 100 meters below sea level and still required a complex five hour intervention as well as huge volumes of water and azote to extinguish the fire. Although the Mexican oil security department has stated that to date, there are no spills, there is still no clarity regarding how the leak was stopped and the environmental impact of the accident. After the Deepwater Horizon accident in the same area, the leak was ongoing for some time after the fire was put out. Seven million litres of toxic dispersant were injected to reduce the risk of an oil spill forming at the surface of the water but with very damaging effects on the coral reefs across the Gulf of Mexico.

This is of particular concern as the offshore industry is increasingly looking to drill 1500 meters deep and beyond, despite evidence that the risk of an industrial accident increases by 8.5% with every 30 meters of depth. As the platforms get moved further away from the coasts, the lapse of time for reaction increases and the means of intervention lessen. Also, the extreme temperatures and pressure at such depths make it more challenging to intervene.

It is critical that the financial sector commit seriously to phasing down oil and gas production instead of encouraging further and riskier developments. Pemex is definitely not the only oil and gas company putting the climate and ecosystems at risk. Banks, insurers and investors must come to COP 26 in Glasgow with pledges to end all support to oil and gas expansion and to the sectors concentrating all the ESG risks: ultra deep and Arctic drillings, tar sands, shale oil and gas.