Despite an improved framing, the climate scenarios published by the Network For Greening the Financial System (NGFS) in June 2021 fail to provide realistic and low risk 1.5°C pathways. The NGFS’ 1.5°C scenarios rely on assumptions that would put us at risk of significant global warming overshoot, above all through the promotion of unsustainable energy usage and investment in harmful activities. The NGFS notably fails to acknowledge the need for a sharp reduction of fossil fuel production, with an immediate end to investment in fossil fuel projects. Reclaim Finance has analyzed the work of the NGFS and offers some key recommendations to the network and its members.

In February 2021, Oil Change International and Reclaim Finance published an analysis of the first set of NGFS scenarios released in June 2020. This analysis identified major flaws, that could delay climate action and increase the associated financial risks. The scheduled review of NGFS scenarios was an opportunity to remedy these flaws, notably by adopting a precautionary approach to carbon dioxide removal (CDR) and framing the scenarios to center those that entail immediate climate action.

Such improvements are crucial for guiding the financial system toward a more sustainable path. Indeed, NGFS scenarios are already being used by French, British and European regulators to conduct risk analysis. They are strongly supported by the UK COP26 financial framework and the renewed EU sustainable finance strategy. Furthermore, the second set of NGFS scenarios came out in July 2021, in a context of multiplying climate commitments from financial institutions and just after the first “Net-Zero” scenario from the International Energy Agency. This new scenario stressed the need to stop investment in fossil fuel reserves and drastically reduce production.

For its second set of scenarios, the NGFS improved its framing to center scenarios that limit global warming to 1.5°C. The NGFS promotes two sets of scenarios, the “net-zero 2050” (NZ) and “divergent net-zero” (DNZ) scenarios – for a total of six scenarios originating from three different models – that reach this objective.

However, while the new framing chosen by the NGFS acknowledges the need for radical climate action, the underlying assumptions taken in its 1.5°C scenarios could lead to financial institutions doing exactly the opposite:

To provide a credible and low risk pathway forward, the NGFS must urgently:

Furthermore, as Oil Change International and Reclaim Finance stressed in their previous report, scenario analysis is intrinsically limited and should be supplemented with concrete measures to mitigate climate change and its related risks. The NGFS should put forward concrete recommendations for immediate action, notably to cut support to companies developing new fossil fuel projects or significantly involved in coal or unconventional oil and gas.

“Unfortunately, the NGFS has missed yet another opportunity to set the correct pace for climate action in the financial sector. While the network finally centers 1.5°C scenarios, its assumptions could push us far beyond this critical threshold. Put simply, these scenarios rely too heavily on carbon capture and storage and permit ongoing investments in fossil fuels, a recipe for climate chaos and stranded assets. The NGFS needs to get with the times, listen to climate science and the International Energy Agency and endorse an end to new fossil fuel projects and investments.”

Annex – Analysis and scoring of NZ and DNZ scenarios

The NGFS’ NZ and DNZ scenarios are analyzed and scored in the table below. Our analysis reveals that all of them are contain very problematic hypothesis regarding fossil fuel use, fossil fuel investment, biomass use and/or carbon dioxide removal (CDR).

Assessment and scoring of NGFS NZ and DNZ scenarios 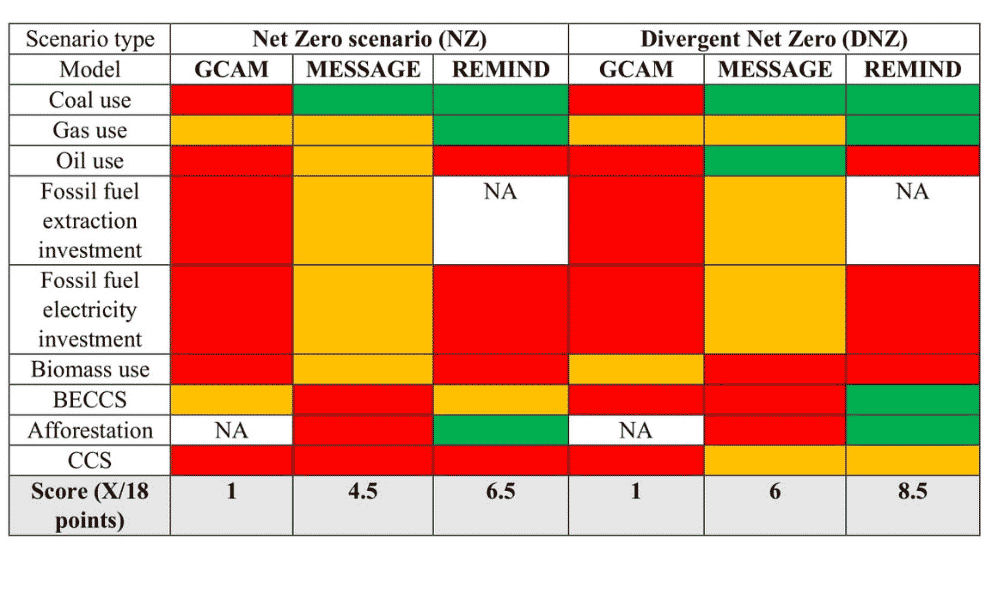