A new report from Reclaim Finance shows that BlackRock, the world’s largest asset manager, holds over $75 billion in thirty major tar sands production companies, all of which plan to develop new reserves of the world’s dirtiest form of oil. BlackRock also holds $3.7 billion in three pipeline companies engaged in the construction of controversial pipelines transporting tar sands oil from Alberta Canada, including Line 3 .

The report points to the carbon intensity of tar sands oil–extracting and refining it makes it 3.2-4.5 times more polluting than conventional oil pulled from North America. A recent report in Nature confirmed that extracting all tar sands oil would use up almost one-third of the planet’s remaining carbon budget to keep the world below 2°C. The report also points to the many other risks and harms of tar sands oil, includinga variety of pollution impacts and violations of Indigenous rights and sovereignty.

BlackRock’s investments in controversial oil & gas giant Enbridge add up to $1.2 billion, as of December 2020. Oil and gas represent more than 97% of the company’s investments in 2019 and renewables less than 0.5%. The company has been pushing for years to build the massive Line 3 pipeline in Northern Minnesota, to take oil from Canada’s tar sands region to Superior, Wisconsin. A recent report on the carbon impacts of Line 3 found that the construction would add 193 million tons of greenhouse gases to the atmosphere annually, with a yearly emissions impact equivalent to 50 new coal-fired power plants. According to Honor the Earth, this project violates the treaty rights of the Anishinaabeg by endangering critical natural and cultural resources.

The news comes amidst a swell of climate-related announcements from BlackRock and its CEO, Larry Fink, including a pledge to go net zero across its entire portfolio by 2050, to use its shareholder voting power more rigorously on climate proposals and board votes, and to require transparency from companies and to be more transparent itself about carbon emissions.

Reclaim Finance has previously revealed that BlackRock has $85bn invested in coal. This made it the second largest institutional investor in coal in the world, according to the 2021 Global Coal Exit List.

The report presents numerous demands for BlackRock to achieve consistency between its net zero pledges and its holdings in major fossil fuel developers, especially those involved in unconventional oil and gas development. That includes the quick adoption of a tar sands exclusion policy for its active portfolio, ceasing investments in companies involved in tar sands, and a set of standards for how BlackRock should deal with tar sands companies in its passive portfolio. 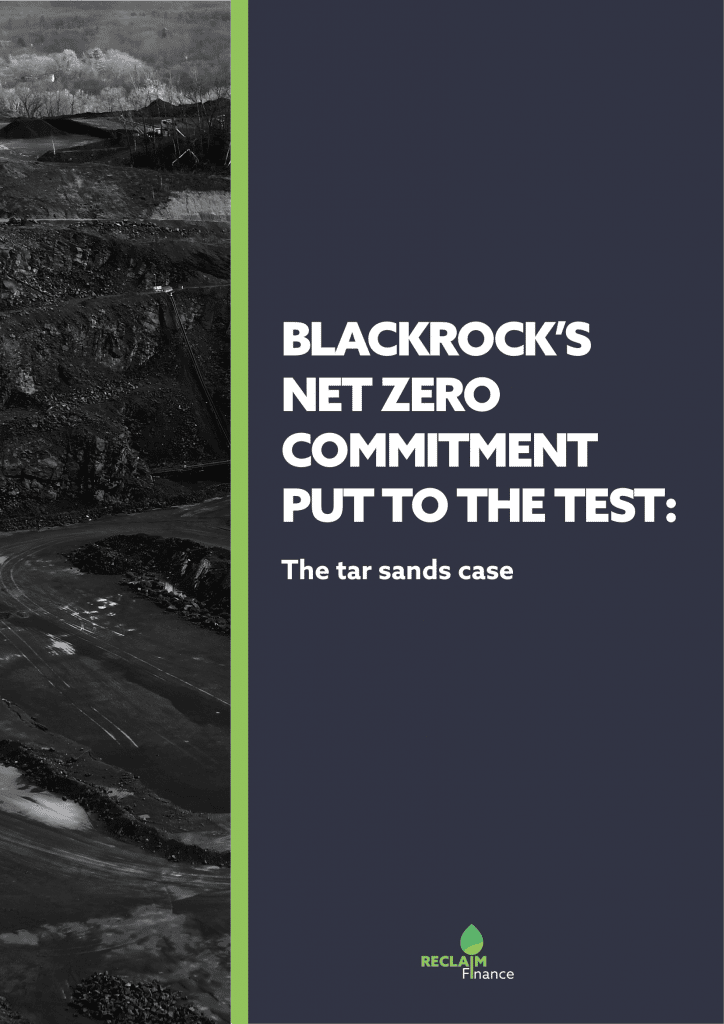